Sandra has been teaching private music lessons for 34 years.  She started organ lessons at the age of 9, piano at age 13 and flute at age 14.  She started teaching at age 14.  In 2015, she became the first Nationally Certified Teacher of Music in Flute in Wisconsin and the first non-collegiate Nationally Certified Teacher of Music in Piano in the Chippewa Falls/Eau Claire area.  She has her Bachelor of Music Degree in Music Performance with a major in flute and minors in both piano and organ.  While at UWEC, Dr. Timothy Lane was her flute professor for 4 1/2 years.  Piano and organ instructors included Dr. Donald Patterson, Nanette Lunde and Paul Kosower.  Sandra also has been Kindermusik trained (teaching music and motion to newborn through age 7) and was licenced for a number of years.  However, her love is with the private students!  She is currently studying and applying Music Mind Games to her lessons.

Performances abound for Sandra.  During her high school and college years, she provided music for many funerals and weddings, as well as holding organist positions with a Catholic church, Lutheran Church and an United Church of Christ.  She also worked as a pianist for ballet classes.  During her time at UWEC, she performed in the Symphony Band, under the direction of Dr. Donald George, as well as completing 3 semesters with the Symphony Orchestra, under the direction of Nobu Yasuda.  Currently she performs at each student recital at church as the Choir Pianist and Ward Organist as well as with the Eau Claire Municipal Band each summer.

Sandra lived in Southern California after graduating from UWEC for 3 years.  During her time there she performed as the Flute Soloist for the Jr. Philharmonic Orchestra of California for 1 1/2 years, and as soloist for an off-Broadway musical in Los Angeles, CA.  Sandra has done solo concerts in Eau Claire, Chippewa Falls, Pittsville, WI; Los Angeles, CA, as well as Randers, Denmark.  In 2013, she was the presenter for Schmitt Music's 25th Annual Spring Piano Recital Workshop.  In November 2013 she performed "A Blast from the Past" concert at the Heyde Center for the Arts in Chippewa Falls.

Leadership positions are numerous for Sandra.  After returning from California, Sandra worked full and part time for the Eau Claire Schmitt Music, in Piano Sales for 7 years.  Since June, 2017, she has held the WMTA State Teacher Award of Excellence Chair and Referral Chair & Mentorship Chair for CVMTA for about 5 years each.  She also was the CVMTA President for one year.  Currently, she is the State District Chair for WMTA Audition held each Spring in 14 districts across the state.  She has also organized the local district for 20 years from 1999-2019 and each year this competition includes over 200 students, about 35 teachers, 7-8 judges and 50 volunteers.  At church she is one of the Organists and the Choir Pianist.  She has also held positions as the Music Chair (for 16 years), Primary Pianist, Choir Director, Sunday School teacher, Primary Secretary and Librarian at church since 1996.  Opportunities abound as she volunteers in providing music at Mayo Hospital bi-monthly, works with the South Middle School flutes, as well as shares her talent on the flute, organ and piano at church and with students in recitals.

Sandra's background also includes some non-musical training and accomplishments.   Most recently, Sandra has become Certified as a nutrition Mentor and coached people in nutrition and fitness.  She also grew up on a dairy farm and learned the valuable lesson of hard work by milking hundreds of cows and farming with horses exclusively.  It was not uncommon to find Sandra on the horse, either for a ride or to get the cows or even to relate messages to those working in the fields.  She also raked hay with the horses and enjoyed many hayrides for fun!  Before graduating from high school she commenced an Associates Degree in Travel and Tourism.  She completed that degree just 2 months after her high school graduation during a residence training in Florida.  While in college and in California, Sandra worked as a night auditor for a couple of different hotels including the Beverly Hills Pavilian in Beverly Hills, 90210.  In California she had the opportunity to work as a Ship Representative, on shore, for Princess Cruises.  During her first year with them she earned a prestigious award for outstanding accomplishments.  Part of the reward for this was to enjoy an all expense paid flight/cruise to Vancouver, CA, and back to Los Angeles.

Her private studio currently consists of piano and flute students between the ages of 4 1/2 through retirement.  Students range in levels from the very beginner to advanced.  On this website you can view some of the programs that are offered through her music studio including WMTA Auditions, MTNA Achievement goals, Federation, Recitals, etc.

In October 2013, Sandra recieved the Teacher Award of Excellence 200 point plaque.  In October 2019, she will receive the Teacher Award of Excellence 300 point bar.  This represents over 300 students in her studio who have received a bar or plaque in the WMTA auditions.  In 2010, by complete surprise, she received the Chippewa Valley Music Teachers Association "Member of the Year" award! 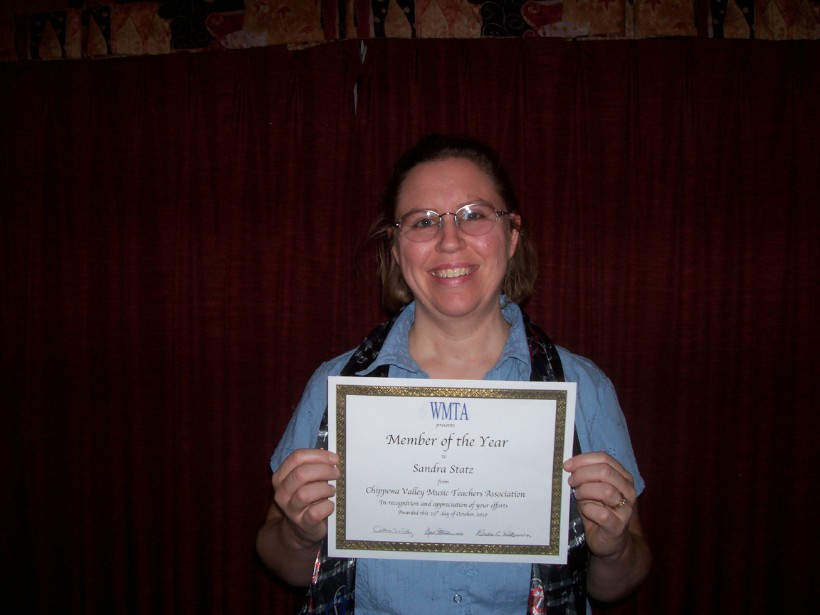 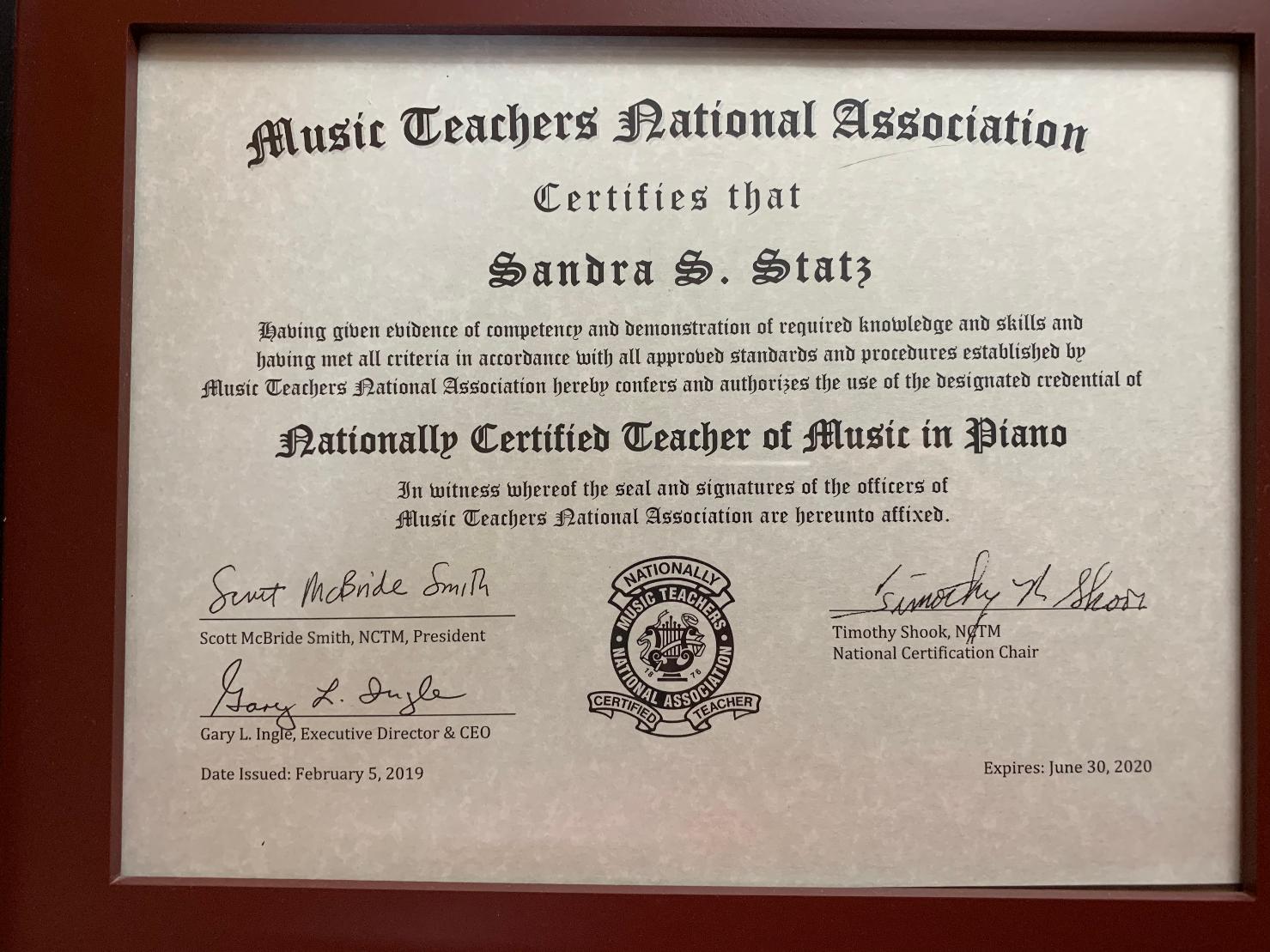 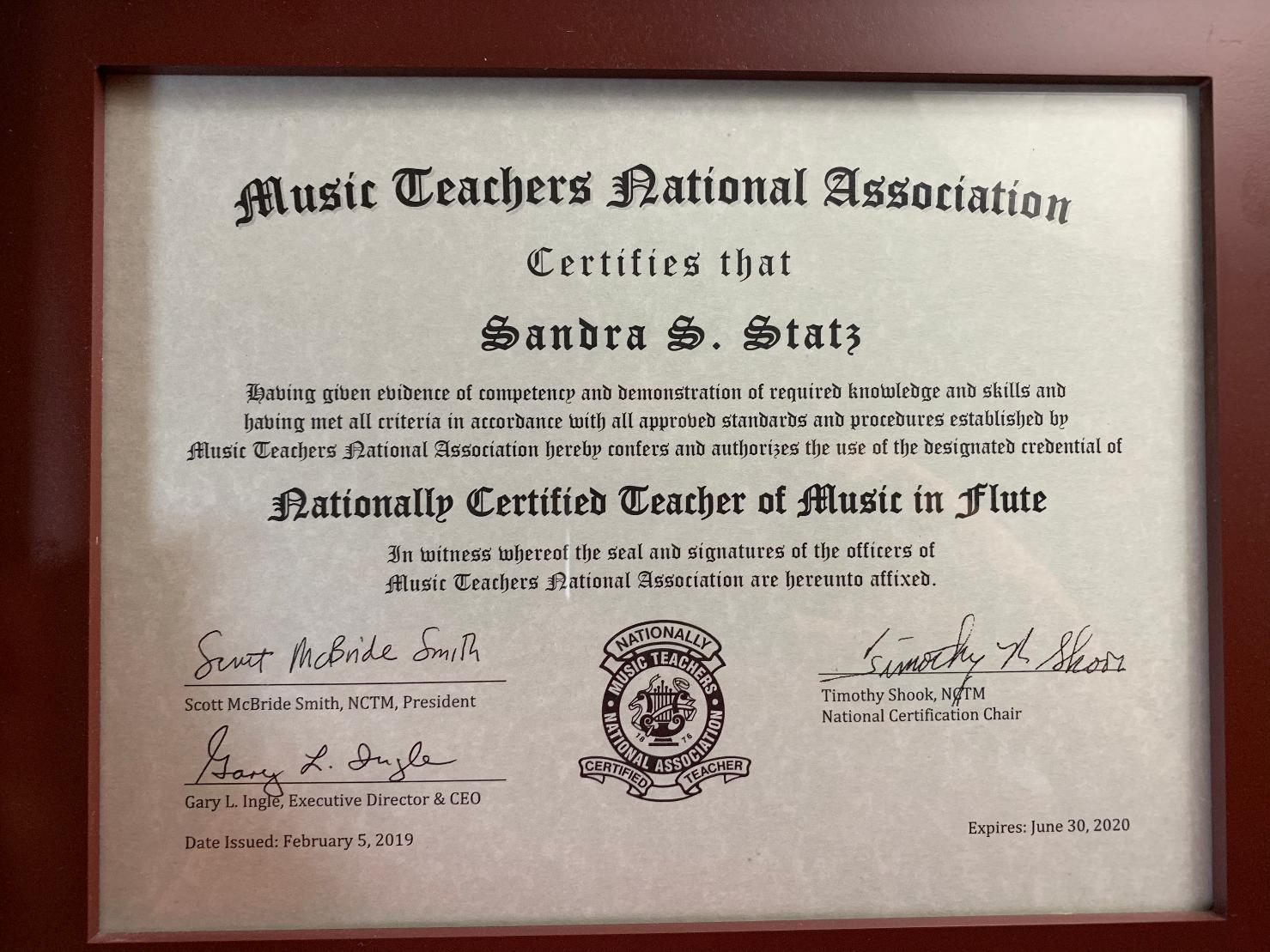